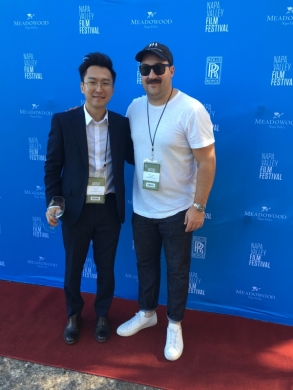 Director Alvin Joo’s short film ‘The Bibcock’s Incursion’ (2018) screened at the 9th annual Napa Valley Film Festival. Alvin is a Los Angeles based director armed to the teeth with backgrounds in cinematography, editing, and sound design. After graduating from USC’s School of Cinematic Arts, he has gone on to direct a deal of films that have screened across the world. Being a proud Korean American, Alvin’s goal is to contribute to Asian American cinema by capturing underrepresented stories with authenticity and style. Another goal of his is to leave his job as a barista in Downtown and direct full time. Alvin is currently co-writing a feature set during the 1992 LA Riots and has just finished directing a PTSD drama of two brothers.

In an interview with Alvin Joo and the film’s writer Nate Ward, here is what they had to say:

How long did it take you to make the film?

(NW): I think from the time the script was written to the finished product was about 5-6 months, give or take.

What inspired you to write this concept into a short film?

(NW): As an actor, I didn’t want to just sit around waiting for an email telling me I had an audition; I realized that if I want to stay busy I’m going to have to make my own content. Far too often, you  write something, take it to someone, and upon reading it they’ll like it, but after further review and consideration, the budget, the story, the whatever is more complicated/expensive than first expected and then the project would sort of end up in this “well, this is cool…we should definitely do this….someday,” pile and that’s the end of it. I wanted to write something simple, funny, relatable but also doable from a production standpoint. I knew that I wanted to work with Alvin, so I wanted him to read whatever I brought him and say, “yes, I like this, we should do this….right now,” and for it to be simple enough that we could start working on it right away. And thankfully it worked out like that.

Did you film inside of an airport?

(AJ): We did not film inside of an airport! From a producing standpoint, finding an airport that would allow us to shoot inside their bathrooms would have been a nightmare, let alone, be super expensive. Instead, we found a public bathroom to a new shopping center in the Arts District of Los Angeles, and we were happy with the way it looked. After the location, what really solidifies the location is the production design and most importantly the sound design.

(NW): No. We filmed in an office building bathroom in downtown LA that was brand new.

Have you always wanted to be a director?

(AJ): I think I’ve always wanted to be a director since I was a kid, however, being a first generation Korean American meant that I wasn’t really given the support from my parents to pursue a career in film. Once began school at USC’s Film Production program, I still wasn’t sure if I was brave enough to call myself a director amongst the hundreds of other student directors. But after taking a directing practicum course, I was able to really understand the true craft of directing–communicating with actors, leading a team, collaborating with your talented friends. It really was an eye opening experience to be able to talk to actors and to create a scene with intent and realism. After that course, I knew I wanted to be a director.

You have filmed a number of shorts. Will you move on to directing features?

(AJ): My dream is to direct a feature, so YES! It’s much more difficult to direct features with the long consecutive days of shooting, but I like the stresses and adrenaline that comes with being on set. I’m currently co-writing a feature taking place during the LA 1992 Riots, with an emphasis being on the Korean immigrant and Korean American perspective.

(NW): That’s the goal! Short films feel like the minor leagues (in a good way) in that you’re not there to make a ton of money to make, but hopefully you show that you have the right stuff to get called up to the big leagues.

How important is it for filmmakers to attend international film festivals?

(AJ): I think it’s incredibly important. I have a friend who made a beautiful 12 minute art house short that wasn’t too popular in the festival runs in the U.S. but did incredibly well in Europe–screening at Clermont–and ultimately was able to receive incredible opportunities.

(NW): I think it’s very important. Aside from the obvious exposure and networking, I think it’s just good for the artist’s soul, if you will, to go see your film to be recognized by simply being included in the festival showing. Often times, budgets are small, cast and crew are working for nothing or next to nothing, so any time you get see your work get it’s 5:30 minutes (in our case) of screen time, it’s a great feeling.

How was your experience at NVFF?

(AJ): NVFF was the best film festival that I have ever attended. The scenery, people, wine, food, and selection of films were all sensational and all contributed to a wonderful festival experience.

(NW): This I my second year at the NVFF and I love it. It’s one of the best run festivals I’ve been to. Everyone, from hospitality coordinators, to the volunteers, to Napa locals, and everyone in between are so great. This is definitely a festival that I plan on attending as often as possible regardless if I have a film in it or not.

How have audiences reacted to the film?

(AJ): We got a full audience to laugh! So that’s pretty good!

What will you be directing next?

(AJ): I’m currently directing some music videos and have a short film in pre production set to shoot in February. Nate and I are also working on a dark comedy feature.

Sylvester Stallone Blames ‘Rocky’ for Him Losing Eyebrows for the Rest...

admin - May 30, 2020
0
Chartoff-Winkler ProductionsIn '40 Years of Rocky: The Birth of a Classic', the actor known for his portrayal of Rocky Balboa recalls all the...

Where Is the Cast of Community Now?

The Best Shows to Watch on BritBox Right Now